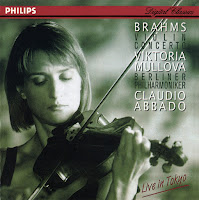 "A CD offering less than 40 minutes of music these days is very short measure, but Mullova's is a commanding performance, pure and true throughout, made the more compelling by the spontaneous expressiveness that goes with a live performance. Her admirers need not hesitate, for with one minor reservation the recording is first-rate, and Abbado and the Berlin Philharmonic here match the Brahmsian achievement of their DG symphony cycle...The clarity of Mullova's articulation in the finale is phenomenal, the bravura most compelling...Mullova's new disc makes an excellent recommendation." --Gramophone [11/1994] 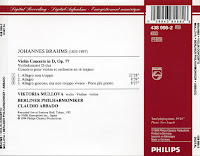 The surprise is that the recording, made at a concert in Japan in January 1992, has taken so long to arrive. Maybe they were waiting for a coupling, but in any case this is a one-off recording, supervised not by Philips's own engineers but by those at NHK, Japan. The reservation I mentioned is that though the sound in generally warm, well-balanced and well-detailed with a pleasant hall-atmosphere, the prominent placing of the timpani means that the many tremolos in the outer movements, notable at first, tend to cloud the texture. The effect is distracting enough to bring home afresh just how many such tremolos there are. Happily, the audience is extremely quiet, except in the brief gap between slow movement and finale.

The first obvious comparison is with Itzhak Perlman's live Berlin recording for EMI with Barenboim conducting this same orchestra. That was made two months after the present one but in the Schauspielhaus, Berlin with a sound-balance typical of Perlman's recordings, with the solo violin in close-up set against full-bodied orchestral sound. The immediate impact of the bravura double-stopping passages is obviously greater, but Mullova consistently compensates in the extra dynamic range that she can convey, with the many reflective passages in the first movement as well as the central Adagio given a rapt intensity.

The combination of purity and warmth go with a clear purposefulness, heightened by the degree of freedom Mullova allows herself in linking the different sections of each movement. Similarly, instead of storming through the thorny technical problems of the Joachim cadenza (curiously not identified in the booklet), she again allows herself a degree of elbow-room, giving it more than usual the feeling of a spontaneous improvisation, culminating in an exceptionally sweet and pure account of the coda, bringing the most inward meditation of all.

The violin entry in the Adagio is then open and songful, with full meditative intensity reserved for later in the movement. The clarity of Mullova's articulation in the finale is phenomenal, the bravura most compelling. . . . Mullova's new disc makes an excellent recommendation . . . . 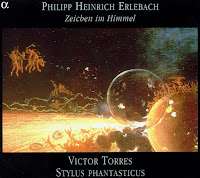 Philipp Heinrich Erlebach was one of the most prolific and highly regarded composers in central Germany in the generation immediately preceding Bach. Unfortunately, little of his extensive and diverse output (several hundred cantatas, 24 masses, and numerous other vocal and instrumental works) remains, due to a devastating fire in 1735 that ravaged the library at Rudolstadt, Thurungia where Erlebach spent 33 years as Kapellmeister. This is a pity, especially if the lovely, inspired works on this program are representative of Erlebach's abilities, which are well served here by the consistently expert, impassioned performances by the European period-instrument ensemble Stylus Phantasticus and bass Victor Torres. 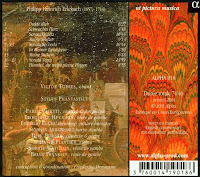 While adhering to the Da capo aria tradition prevalent at the time, Erlebach amply demonstrates his versatility and creativity throughout the six secular arias that comprise the bulk of the program. Torres' sonorous voice beautifully complements Erlebach's skillful settings, with a tone and timbre appropriately suited to the ever-present darkness of the subject matter. Torres' legato is a marvel, and his deft negotiation of some of the more explicitly harrowing lines of "Meine Seufzer" (My Sighs) and in the subsequent passages of "Meine Sinnen" (My Senses) is particularly impressive. 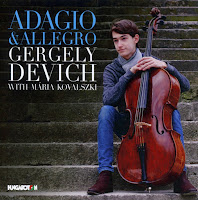 The present CD comprises a selection from the popular miniatures of romantic cello literature. However, the concept of romanticism has been slightly extended to also include into this imaginary club Kodály's and Rachmaninov's lyrical pieces. The works are performed by the third-prize winner of the Eurovision Young Musicians 2014 Gergely Devich, accompanied by his mother Mária Kovalszki on piano.
Release date: 8th June 2015 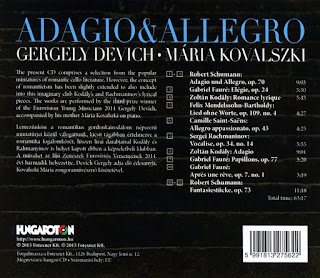 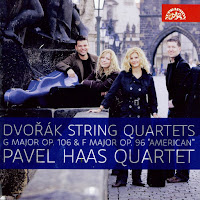 “The Pavel Haas Quartet play with plenty of feeling and they also relish the rhythmic cut and thrust of the Molto vivace third movement, capturing to perfection the more relaxed Trio's sunny spirit.The final opens to a gentle smile then keys up for some dancing exuberance...there's an abundance of varied drama” --Gramophone Magazine, December 2010 *Award Record of the Year 2011

“Throughout, their understanding of the musical argument is exemplary...at every stage the performers respond with both passion and a clear feeling for musical line...In truth, there are so many details that delight the ear it would be almost impossible to list the all” --BBC Music Magazine, December 2010 ***** 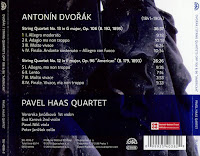 “there's an arresting energy and atmosphere to the performances and they certainly contain new perspectives...the product is beautifully presented.” --Classic FM Magazine, January 2011 ***

“The freshness of the Pavel Haas Quartet's sound and approach is in the main a perfect match for this music: its wide-ranging palette, from intimate whispers to grander, symphonic gestures, is aptly deployed. Its tone is in general sweetly blended, homogenous and with obvious close rapport.” --International Record Review, December 2010
Posted by adem at 7:28 PM No comments: 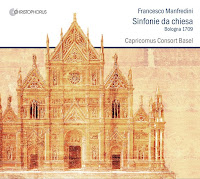 “there is no doubting the enhanced expressive and textural range of these highly sensitive performances, whose expertise is matched by a spontaneous ease that captures the spirit of the music as though it was hot off the press. A stunning achievement.” --International Record Review, March 2015 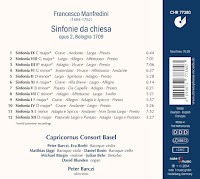 “The two violinists are impressive in their exploration of the expressive traits of these pieces. Through their subtle treatment of dynamics they emphasize the rhythmic pulse. The fast movements are lively and engaging. In short, this disc is a substantial contribution to the discography: nice music, well played and recorded. The liner-notes tell us all we want to know about Manfredini and his op. 2.” --MusicWeb International, 28th November 2014
Posted by adem at 7:23 PM No comments: 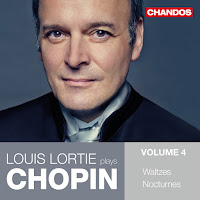 This is the fourth volume of Louis Lortie’s highly successful series devoted to Chopin. The recording perfectly illustrates how Chopin elevated the waltz to a genre of musical art, from danses de salon – evocative of a genial milieu – to ‘works’ with proper opus numbers. Growing up in the 1820s, the composer at first viewed the waltz purely pragmatically, as a means to a social end in the dance salon. But after spending time in Vienna and Paris in the 1830s he decided that a waltz might be worthy of the deeper appreciation accorded a ‘work’.
↪ Vol.3 - Vol.2 - Vol.1 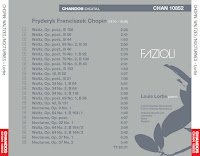 From moods of liveliness, in introductory calls to the dance, to more poetical or sentimental sections, the affective achievement in these works is great, whether the mood captured is plaintive (the B minor, A flat major, or F minor ones), evocative of the dance salon (the E major), lilting (the D flat major), reminiscent of a Ländler (the A flat major, the only waltz Chopin composed in 3 / 8 meter), dramatic (the E minor), or brilliant (the G flat major).

The nocturnes also trace their origins to the salon. The genre derives from a type of vocal music, akin to the solo romance, but highly popular among amateurs as an opportunity for singing duets.

With this series, Louis Lortie has made his reputation as a ‘model Chopinist’ (BBC Music).
Posted by adem at 7:14 PM No comments: 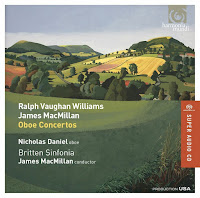 “Not only so his [Nick Daniels'] flawless discipline, liquid tone, exquisite chiaroscuro and seemingly superhuman breath control crush the ear, but he also encourages his colleagues to give their polished and raptly committed best ... Excellent sound and truthful balance throughout: this anthology merits a strong recommendation.” --Andrew Achenbach, Gramophone Magazine, May 2015

“[Daniel] tends to let the tempo slacken when the harmonic pulse slows down [on the Vaughan Williams]...it's hard to complain when that leaves more space for his consistently golden tone...MacMillan also conducts his One, a luminously scored monody.” --BBC Music Magazine, August 2015 ***** 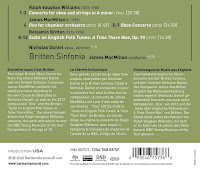 Two major British oboe concertos featuring soloist Nicholas Daniel with the Britten Sinfonia. Composer James MacMillan conducts the world premiere recording of his own Concerto (dedicated to Nicholas Daniel), as well as his 2012 composition 'One' and the Britten 'Suite on English Folk Tunes: A Time There Was'. The oboist himself directs the Ralph Vaughan Williams concerto, the work with which he won the BBC Young Musician of the Year Competition at the age of 18.

“He is arguably Britain’s most virtuosic and adventurous instrumentalist and as mesmerising a talent now, at 53, as he was when he won the BBC Young Musician of the Year competition 35 years ago...The oboe writing [in the Macmillan] is insanely demanding throughout; Daniel is stunning.” The Times, 11th April 2015 *****

“A fine showcase for Daniel’s mellifluous playing, the disc is still more than that, ending with a lovely account of Britten’s Suite on English Folk Tunes, and teasing one with a magical, five-minute piece by MacMillan...It is simply (complexly!) a monody passed round the players, glistening as it goes.” Sunday Times, 26th April 2015

“Oboists may feel ruefully that musical history owes them a showpiece. They have one now: MacMillan’s Oboe Concerto turns the soloist into a nimble-footed musical athlete, a star opera singer, a dazzling Highland dancer, all in the space of three varied movements. Nicholas Daniel makes the most of its virtuoso opportunities, raising the elegiac slow movement to intense heights.” Financial Times, 25th April 2015 ****

“On this disc of delightfully summery music, the emphasis is initially on the pastoral: the airborne lyricism of Vaughan Williams’ Oboe Concerto, its liquid lyricism shaped with velvet perfection by soloist Nicholas Daniel and the Britten Sinfonia … MacMillan’s own Oboe Concerto introduces a feistier mood, its nimble virtuosity playfully executed by the same soloist.” The Scotsman, 2nd May 2015

“This is a bravura display by Daniel, with lightly assured playing from the always-rewarding Britten Sinfonia.” The Observer, 24th May 2015 ****
Posted by adem at 8:12 PM No comments: